There’s a Better Approach to Life than Achieving, Striving & Grasping 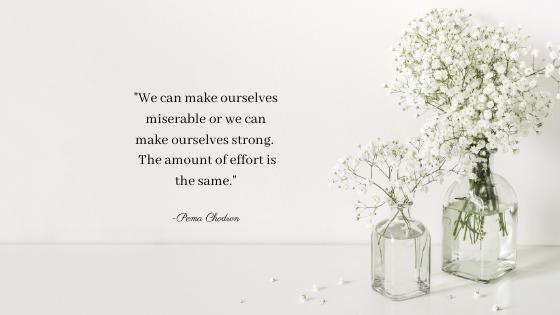 I was standing on a rocky cliff, peering over the edge into the unknown.

Creeping forward as slowly as possible, I strained to see into the vast expanse before me, yet felt the invisible pull from behind. The sensible and scared voice in my head begged me to stay safe.

This sensible and scared voice can be for us a soft, padded belt around our waist, holding us gently as we lean into a new experience of life, or it can be iron shackles around our wrists and ankles—unbreakable, no matter how hard we strain to break free.

If you are a perfectionist, as I have always tended to be, I’m sure you know which one you identify with.

Making the decision to try something new, or to make a change in our lives can paralyze us with fear of the unknown. Most of us who are perfectionists find that getting started can be the hardest part because we don’t want to make a mistake or be judged. We’d rather wallow in a self-imposed pity party than take a risk and be seen as a failure.

I had been practicing yoga for several years when I had the crazy notion that one day I might want to teach it. I wanted to share with others the emotional and physical healing that I had received from yoga.

Cue the inner sadistic perfectionist who admonishes that I can’t get my heels to touch the mat in downward dog despite years of practice.

I oftentimes have trouble getting my mind to quiet in perfect synchrony with my breath, and for the love of all things holy, as a textbook introvert, you want me to stand up in front of a roomful of people and their judgments? Not in this lifetime.

Then I saw a teacher training that seemed to fit what I was looking for.

The teacher trainer claimed it would change our lives. Even better, we weren’t expected and required to teach at the end of it, we could just use it as a means of deepening our practice and knowledge of yoga beyond asana. Perfect! Less pressure and fewer expectations to live up to.

We met a few weekends a month as the seasons changed from fall to winter, and then on to spring. I saw that everyone else was at varying places in their practice too. Almost no one came into the training capable of (or wanting to) practice advanced arm balances or full splits as Instagram yogis frequently depict in their youthful elegance and grace.

Many of my fellow trainees were retired from their careers, and others had no desire to leave their chosen professions to teach yoga full-time. Everyone was kind and supportive. No one was judging anyone else.

Watching others step into the energy of a teacher and declaring their intentions to teach helped me see that a new opportunity was available to me as well; all I needed to do was walk through the door that was opened when I committed to the training.

As I began the required readings, I found that the more I learned, the more there was to learn. It reignited the love of learning that I had had since I was a child, but had been hibernating under the daily tasks and responsibilities of motherhood. Once I got started, I found it hard to constrain my focus to yoga asana, and dove deeper into the eight limbs of yoga, applying the ancient teachings to my life off the mat.

Contemplating the Yamas and Niyamas deepened my desire to be a kinder, more patient, and less attached person. I began to find that possessing and accumulating new things was no longer a priority. I began to consciously focus on setting the direction I wanted my life to take, all the while releasing the attachment I had to the outcome.

It started to become more important to focus on the art of daily mindful living, and not the attainment of a goal set arbitrarily in the future.

No matter where we set our goals, thinking that we will be happy when we achieve them instead of finding happiness in the process is a recipe for frustration and disappointment. If only they taught that in schools instead of achieving, striving, and grasping.

I began to bring attention to the small daily or weekly gains that help keep a slow and low burn crackling in my energy furnace.

For at least the first month after I started teaching, I would sit in the incorrectly named “easy” pose at the beginning of class, or stand in mountain pose with legs trembling and my heart beating out of my chest. I would stumble over my words and forget most of the plans I had made for the class.

The sadistic perfectionist hanging on inside of me was mortified. But I just kept going despite the “failures,” despite my lack of confidence, and despite the less than stellar feedback I got from a student or two.

Most students were gracious and supportive; maybe they too had tried something on once that didn’t quite fit, yet had done their best to make it work.

As a teacher, I discovered that it means more to have a student say that the pain or low mood they were feeling before class eased and became lighter than the acquisition of any professional designation or letters after my name could ever bring.

Developing my voice as a teacher has allowed me to become more assertive, confident, and clear in aligning with my life’s path and vision. It has allowed me to peer into the unknown and loosen the shackles that kept me playing safe and small.

Above all, teaching has helped me embrace my own fractured pieces so that as I accept myself as whole and complete, I may, one class at a time, inspire someone else to do the same.