Using Early Experiences as a Catalyst for Healing 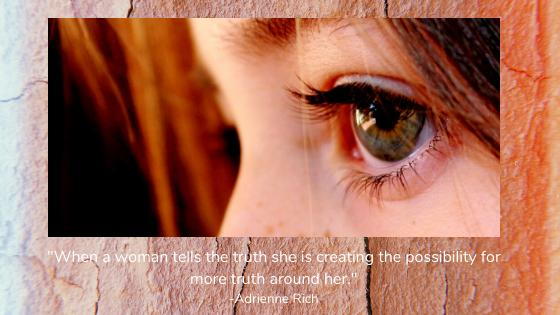 When I was a teenager, a friend was physically abused by her father after he had been drinking. Maybe because he was a respected member of our small farming community, everyone turned a blind eye. Maybe no one wanted to get involved in a domestic dispute. Maybe whatever the reason, it was the wrong thing to ignore.

Other friends were abused by their boyfriends, and again nothing was done and little if nothing was said to let them know that not only was this not normal relationship behavior, it was criminal.

A seed was planted in my mind back then that no one should be made to feel as if they are unworthy of love or as if they don’t matter. As I began to study psychology, sociology, social work, and later yoga, exploring why we humans do what we do, these early memories were like deposits in a vault.

Tucked away and stored until they were able to be accessed from a distance, the critical thinking part of my brain trying to reconcile how one person can so completely annihilate another person’s sense of self. Particularly when that person is a child.

Years later, when I was working with children in foster care, this wonderment about human nature hit me like a freight train. I would read case histories that detailed abhorrent physical, emotional, and sexual abuse and neglect in all forms. But reading narratives on paper is vastly different than attempting to build a trusting relationship with these children in real life.

Not surprisingly, some children were withdrawn and unable to trust. Some were wound so tightly that they were like a firecracker just waiting for a match to explode. The abuse or neglect they had suffered played out in other ways as well. Lying, stealing, promiscuous behavior, tantrums, self-harm…all coping mechanisms for a bodily system that is completely dysregulated and unable to cope with feelings too big for such small people.

However, there was something else there too. Sometimes it was buried so deeply beneath the hurt that it was nearly impossible to spot if you didn’t take the time to look. But now casting my mind back 20+ years, they all had it. All of us do.

In some people who haven’t veiled themselves for self-protection, particularly children, there is an inner light that shines so brightly that we can’t help but bloom in their presence. Even if we previously felt like a desert wildflower, brittle and thirsty for a summer monsoon to wash over us so that we feel clean again, their light is an invitation to let our guard down, even if just for a few moments.

Many children, far more than you realize, feel unseen and unheard because someone bigger and stronger snatched their power away. Yet there is still an innocence underneath this, a place inside that cannot be touched. The problem is, we do a downright horrible job of conveying this to the most vulnerable members of our society.

So while some children are able to use their past experiences as fuel for their fire, burning ever more brightly as they step into their power as an adult, the more common experience is one of dimming their light for their own self-protection to avoid being seen and hurt further.

Many of the latter are girls and women I’ve known throughout life that thought they didn’t have any other options. That they had to endure being hurt or humiliated in order to be accepted or loved. That they even thought being treated in this way was an expression of love to begin with is like an open wound that never heals.

According to psychologist and spiritual teacher Tara Brach, “Because we were wounded, most of us, in relationship, most of us need relationship to heal.” Basically, if we are one of the wounded, we heal those wounds when we start to pull back our veils and allow ourselves to be vulnerable with another who is worthy of our trust.

We also begin to find forgiveness for ourselves before we can extend it to those who have hurt us. Not for their benefit, and often without their knowledge in some instances, but for our own hearts and that space of untouchable innocence within.

We can forgive ourselves for being unable to come to our own rescue. For not fully understanding what was happening to our bodies and our minds. For not being more physically resistant. For thinking that someone was showing us love when they were being manipulative and coercive. For being too scared to tell someone what was happening. For enjoying the attention.

Whatever the harm was, take a deep breath and begin to forgive yourself with each exhale. Begin to feel the tension the years of holding on to this story has been having on your body, your mind, and your spirit. Begin to let that tension dissipate from your jaw, your shoulders, and your ribcage with each slow breath.

Even if your light has been so dimmed that the slightest breeze can cause it to flicker, your inner resolve is still there and is still strong. In this moment and with this breath, you are in the present. The past is just an illusion because you can’t actually return to it anywhere outside of your mind and thoughts.

Movies, TV, and books often glamorize going back to the past, as though fixing something there would negate the pain that we’re feeling now. But perhaps there is a reason we can’t go back and fix the past. Perhaps the experiences of the past, despite the abject horror of them in some cases, brought us to this current moment so that we can not only heal ourselves, but so that we can help others through their pain as well. So that none of us continue the cycle of abuse.

The power of thought and the power of forgiveness are uniquely human gifts that have a greater influence on your life than any circumstance or past event ever can.

How are you going to use this gift?