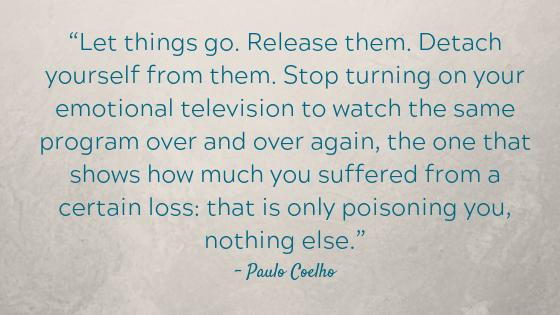 If you grew up in the era of “Friends,” you may remember an episode in which Ross buys a too-large new sofa and because he has a written plan for getting it upstairs, is convinced that he, Rachel, and Chandler can move it up a staircase.

As they make the turn in the staircase, Ross directs them to pivot…pivot…PIVOT…PI-VOT!! This leads Chandler to yell back at Ross to shut up…shut up…SHUT UP!!

And spoiler alert, it also leads them to get the sofa wedged into the stairwell and Ross later asking the store for a return on the sofa, which has been cut into two pieces.

I’m using this example because it strikes me that we approach a lot of life’s challenges in this way.

Sometimes we can become overly focused on the future, whether it be on a goal we’re striving towards or a plan we’ve had our hearts set on. Instead of gracefully easing through transitions the way a fork in a river can cause equally flowing paths to appear, we instead construct a mental dam that halts the effortless flow and unfolding of events into an impenetrable barrier of stuck thinking.

How we react when this all goes awry has a lot to do with both resiliency and our ability to detach from the outcome and pivot in a new direction. For the yogis, the non-clinging and non-grasping practice of Aparigraha applies, where we endeavor to just let both the material and non-material go.

Last week I had this exact thing happen. I had planned a short driving vacation through Southern Colorado while my kids had four days off for fall break, mostly to gawk at the indescribably vibrant golden aspens contrasted against the dark green pines and dramatic mountain backdrops.

Two days before we left, I checked the weather report and saw to my great dismay that the day I had planned our first visit to Telluride to leaf peep and hike to a stunningly beautiful high country lake, the temperature was going to plummet to a high of 30 and a low of 7 degrees.

As disappointed as I would have been to miss out on seeing this area for the first time, I tried to pivot to a warmer nearby town that wouldn’t be too far off of the planned route. No such luck, as the hotel in Telluride was the only non-refundable (and naturally, most expensive) overnight stay on our trip.

Anyone who knows me knows that I barely eek out an existence when it’s below freezing, usually burrowing away at home and only venturing out when I absolutely have to out of necessity or straight up cabin fever, typically under 3 or 4 layers of clothing.

So…onward to the freezing cold we went.

But wait! First, there was another pivot, as for probably only the 3rd time ever in my life, I left my purse in my car in a friend’s empty garage, where ostensibly the plan had been to cut travel time by meeting up with my husband as he left work, saving him from having to drive the 35 minutes home the opposite direction we were headed.

Luckily about an hour into the drive, my daughter asked for a tissue and we realized my purse was not there. Thank you to Apple Find My Phone for helping us determine that my purse was indeed left behind. PI-VOT!

We finally got to the hotel around midnight, only to be given a room with all of the unwashed bedding piled up in the window. The front desk clerk seemed to find this more amusing than we did at that hour.

The drive the next day from Dolores, CO to Telluride serenely wound along a sparkling river, where deer were seen pausing to drink and we began to see last night’s light snowfall along the mountain range to the northeast.

We only had one night in this magical place, and as I pondered the next day’s activities and drive, it occurred to me that just because we were all of the opinion that a long hike was out of the question due to the 28-degree temperature, that didn’t mean I couldn’t look for something really short that we could quickly zip to so we wouldn’t completely miss out on the hidden beauty in the area.

This pivot ended up being one of the most spectacular sights on the trip and one that I was probably the most grateful to have made, calling into question the necessity of anything in my purse besides my Driver’s License and money.

Truth be told, it was actually quite nice to not have my phone demanding things incessantly with its buzzing, dings, and alarms when the ringer is on. Which more and more often, it’s not.

Granted, we were the only people foolish enough to scramble up the trail to the waterfall this early on a frigid day, but that made it all the more special. As the water cascaded over the red rocks, it froze at the bottom of the waterfall in a pile of ice and snow, which the kids tossed rocks into with glee. Huge icicles hung from the sides of the mountain and ice-encased plants tried to survive along the stream. 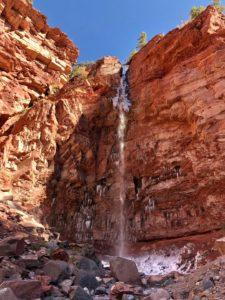 The moral of this travel blunder being this…we never know what is on the other side of a pivot that we need to make. Sometimes we have no choice when life changes course, as it often does without warning and certainly without our permission to do so.

When we cling so very tightly to the way things need to be, HAVE to be, we often can’t see the possibilities that can arise out of the rubble. We cut the couch into two pieces to get up the stairs instead of just buying a smaller couch.

Some of these pivots, small as they are, could end up being the best things that have ever happened to us. A chance encounter that leads to a new partner, friend, or business opportunity.

Or maybe just the ability to see something incredible that you didn’t even know was hidden in plain sight.