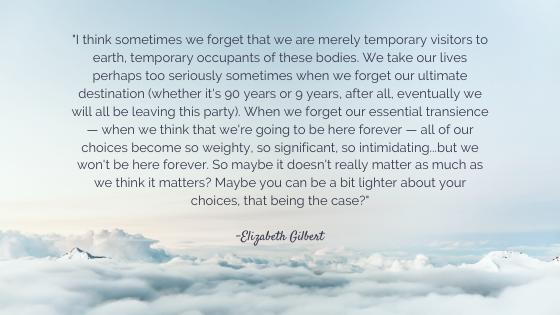 One of the most helpful and stress-relieving tools that I have learned from my mentors is the ability to make a decision quickly, without agonizing over the process or the possible results.

I used to spend an inordinate amount of time doing research, questioning the options, performing mental cost/benefit analyses, and trying to predict future results for every important (or not so important) decision I had to make.

Now, had I been paying closer attention, I would have noticed all of the unnecessary anxiety that this process was causing. I would have also been more attuned to the fact that I spent (wasted) a crap-ton of time making these decisions, with very little difference in terms of the actual results.

So why do we waste so much time on decision making? Because as long as a decision remains un-made, we stay safe in the comfort of the known. Our brains work ridiculously hard to stick to the familiar as an evolutionary mechanism to keep our species alive.

So why are these decisions so hard to make?

Changes in technology now make it seem as if everyone is living better than we are, having more fun than we are, and making more money than we are. We are bombarded by thousands of ads every day on the radio, on TV, on our phones, on our computers, in our mail, in magazines, on billboards…basically, everywhere we look.

All of this input is coming at us with the message, “You are not enough as you are. But if you buy this, you’ll fit in. People will like and respect you. You will feel better.” This immediately triggers the part of our brains that is geared for survival, because in the past our ancestors would have faced almost certain death if they had been outcasts.

Historically we have needed other people to survive, and therein lies the crux of the problem. We inherently want to be like others (at least in some ways) to ensure our survival. So what happens if we make the “wrong” decision? We may be rejected, made fun of, or lose our status amongst our peers or family.

But really…so what? Who cares if your post on Instagram or Facebook doesn’t get likes and new followers? Does it make you less worthy? Less valuable as a human being? Less of a contributor to society?

Does it make you courageous for putting something out there that could help someone else? Could someone be reading your posts, listening to your message, or being helped to feel less alone even if they don’t say so publicly?

Could your artwork, photography, recipe, or hand-made crafts inspire someone to start tinkering around with their own creative projects? Will you allow not having confirmation of this keep you from greeting each day as a new challenge?

Can you start to approach decisions with a bit of whimsy and lightheartedness, knowing that it is up to you to mold and shape the process while releasing expectations about the outcome?

What would happen if you changed the thought that one decision is right and the others are wrong? Each decision leads you down a different path, and if you don’t like the path you’re on, you can always change course and pick a new one.

This does not mean that the first decision was wrong, or that you are flawed in some way. It just means that you have learned something about yourself, have grown, and are becoming clearer on the vision you have for the future.

When you aren’t agonizing over a decision, you create the time and space to move into a future where you have less stress because the worry over what you will do, what you will wear, what you will eat, and where you will go will transform into how you will show up and exist in this world.